Foundations, charities, and NGOs have more than a philanthropic mindset in common; they operate in one of the few industries that not only has low investment in valuable technology, but perpetuates that lack of investment as acceptable. With technology having the ability to greatly improve process, data, and overall organizational impact, it's time for that to change.

We live in a tech-centric world. This isn’t exactly a news flash, it’s a way of life. Humans today expect instantaneous information. We rely on algorithms and AI to tell us what to order for dinner, what show to binge next, what TV to buy. Good or bad, technology has improved the speed at which we do most everything.

That is, unless you work at a nonprofit. Historically, nonprofits of all shapes and sizes are quite behind the typical technology adoption curve. But technology can be the tool that enables nonprofits to do some of their most valuable and important work - effectively enabling their missions. Connecting with their constituents in the ways that they prefer, collecting important data that can inform decisions or showcase real results, and protecting data in an era of heightened security and privacy awareness can all be achieved with technology.

And now thanks to COVID-19, for many nonprofits technology adoption is switching from a want to a need. The connection, streamlining, and data sharing that a technology can provide are now more necessary now than ever. While for all of us the impulse to be more prudent, save, or freeze spending during downturns like this is natural, nonprofits cannot simply just put their missions on hold; their constituents are in even greater need, and tools to help them are even more necessary.

The good news is that the adoption of tech in the nonprofit space is improving -- according to the Nonprofit Technology Education Network’s 2017 survey of Tech Investments, median budgets for tech spending grew by about 25% from 2015 to 2017.

But there’s still a way to go.

So if nonprofits can clearly see how technology might help them, why is it so hard for them to actually invest?

Well, for one, optics. Currently, the go-to measure of efficiency in nonprofit management is the overhead ratio. It’s a classic accounting model, but it’s been perpetuated as the one nonprofits are judged on because the public assumes that foundations should spend all their money on giving.

The first problem with it is how simplistic it is. To keep the resulting ratio low -- and have the organization look efficient on sites like Charity Navigator -- operating expenses have to be kept low. This means staff is limited and investments in tech -- as well as other needs -- are delayed. The foundation may end up hurting itself for the sake of appearances.

The second problem is that this severely limits the potential of the organization, and completely disregards programming and impact, which are the cornerstones of why nonprofits exist.

It’s easy to get caught up in this chicken and egg problem. Nonprofit leaders can’t do more unless they have the right technology, but they’re afraid to invest because donors expect low overhead.

The Stanford Social Innovation Review calls this the “nonprofit starvation cycle”. The cycle begins with donors’ unrealistic expectations about how much it costs to run an effective nonprofit. This results in nonprofits skimping on vital systems and proudly stating their low overhead, which fuels donors’ skewed beliefs.

How do we change this? How do we break the cycle? We know change isn’t easy, and convincing a large population that this isn’t the best way to measure giving isn’t going to be an easy lift. We need to first change our thinking internally, but then to convince the masses, we’re going to need hard evidence.

Knowing this is not a smart way to run or judge nonprofits, other approaches are appearing.

University of North Carolina researchers have suggested alternative methods that account for input as well as output.

But before you panic, let’s look at the basics.

This is called the Data Envelopment Analysis, and the equation automatically assigns weights to the inputs and outputs that maximize efficiency and calculates an efficiency score. It takes into consideration something inherently important to the nonprofit industry -- the impact you create with what you use.

So let’s see how this works in practice. When UNC researchers looked at how nearly 800 Habitat for Humanity regional offices ranked using the overhead ratio and then how they ranked using DEA, the results were very different. Financial ratios like the overhead ratio were either not significantly correlated or even negatively correlated with the output-inclusive measures. Meaning those that ranked as being the most efficient were not those that created the biggest impact. Not even close. 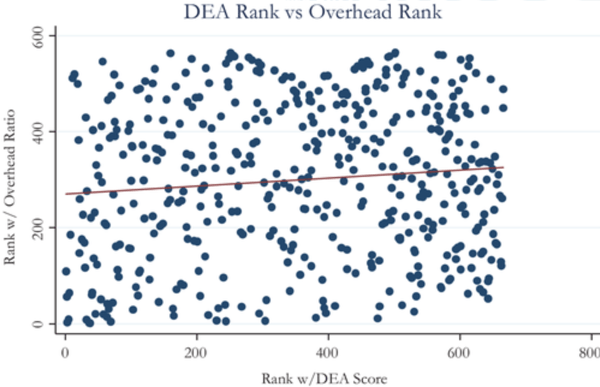 In fact, this is what the final data looked like - a swarm. Offices who did a lot efficiently were sometimes ranked poorly for overhead ratio -- because they invested in their organization. Offices that did not make a lot of impact were sometimes ranked very highly for overhead ratio -- because they were frugal. But Habitat for Humanity’s mission is not to be frugal. It’s to provide housing. Mission and impact need to be part of the equation.

Rethinking how we view nonprofit investments

The Data Envelopment Analysis is not something you should jot it down and begin plugging numbers into. I doubt many of us would know where to start. But there is an amazing takeaway from it:  it’s more. It looks at more. It considers more. It weighs more. It’s not black and white. Grantmakers know that giving is not black and white, and it’s certainly not simple. Perhaps how we rate how it's done shouldn’t be simple either.

As you think about your organization’s mission, consider what your team needs to deliver on to very best of your ability. What is holding you back from that? Some of those reasons certainly will not be investment issues, but I guarantee you many of them will. Look for the issues in your process now, and the potential impact you could make if they were solved.

A great example of this is one of our clients, Hope Chest for Breast Cancer. They are a nonprofit that supports the daily needs of breast cancer patients facing financial struggle in the state of Minnesota. They have a beautiful grassroots beginning and these days help cover rent, car payments, child care, etc. But they were finding that by the time applicants completed their application, the team reviewed it, and checks were cut, people were already facing eviction or missing doctors appointments because they had no way to get there. They were doing something wonderful, but without being as efficient as possible, they felt they were failing their grantees. They needed technology that could reduce time to payment, and once they took that leap, they were able to go from payments taking weeks to about 3 days. Investment was their road to better impact.

According to TAG’s Roadmap for Funders: Investing in Digital Technology report, private sector spending on technology, regardless of industry, is likely to be at least four times that of the social sector.

It’s become commonplace to utilize technology to power nearly everything in the world - except philanthropy. The challenge before us is to change that, ending the stigma around nonprofits investing in their growth in order to further mission. Change, as always, is hard, but an educated and driven nonprofit sector can pave the way.

1. Define your needs and the solution.

The most important work often starts at home, or in this case, in your organization. Take the time to review your current program and process. Where are the hiccups? What are you missing? What would be so much easier if you had a new or different tool? Draw as straight a line between your issues and the solution that you need.

2. Do some background reading on nonprofit tech.

Reading this is a great first step. Keep going. There are so many resources out there that can help open your eyes to not just why or how technology can help you improve your impact, but can empower you to make the case for it.

For one, we have a great guide on our site on how to present to executives or your board and justify your need for investment.

But beyond that, groups like PEAK Grantmaking, NTEN, and TAG, have so much to offer. Dig in. Find examples of organizations similar to you so you can showcase their success. Pull some statistics that will open some eyes.

Next, just speak up. No matter what level of your organization you are in, your voice is important. Share what you’ve learned. Pass on some articles. Share links to the vendors or softwares you think would really improve how you do your job or facilitate your grantmaking in making a larger impact. The reason the nonprofit starvation cycle has been perpetuated for so long is partially because no one spoke out against it.

This last one is a hurdle. It’s bigger than any of us alone, but it starts with us. Help your donors or supporters understand where funding is going and the real impact of their money. Help them understand the benefits of investments and how it can exponentially increase your ability to deliver on your mission. Focus your annual reports or newsletters on how you are improving your infrastructure to improve your giving. No one would fault someone for fixing a failing foundation on their home, and you may be surprised the same would go for improving an outdated or hindered giving process. 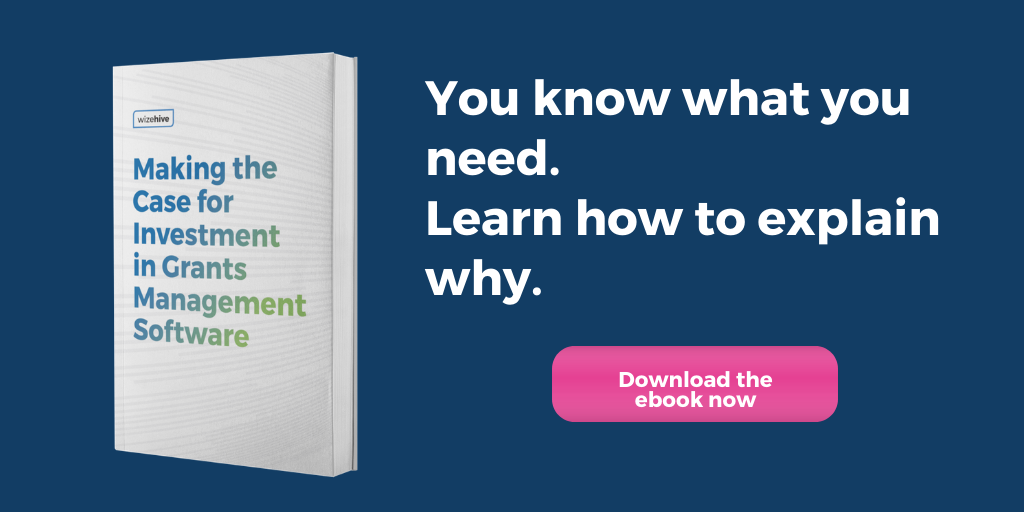